The PREMIER
PAINTLESS DENT REPAIR
Company of the TRIANGLE

Dent Dominator is your local source for paintless dent repair services. Our trained and knowledgeable paintless dent repair technicians can provide all of the services you’d expect, all while saving you money and cutting down on the time required when compared to traditional auto body repair. We also offer wheel & rim repair, window tinting and ceramic coating in Raleigh & the triangle. When you are looking for the best for your car, from dent repair to detailing, choose Dent Dominator in Raleigh. 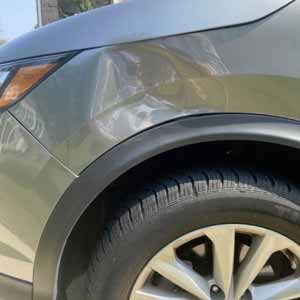 PDR of Acorn and Hail Damage
in Raleigh NC, Cary, NC and the Triangle

Dent Dominator is your source for hail damage repair services in Raleigh, NC. Paintless Dent Repair for hail or acorn damage will restore the beauty of your vehicle by removing unwanted dents and dings from hail, acorns, tree limbs, hit a deer, or other causes of minor vehicle damage.

PDR For Minor Collisions in Raleigh, Cary and the Surrounding Triangle Area

If you live in the Triangle and have been involved in a minor collision, get professional paintless dent repair services from Dent Dominator. Unrepaired vehicles have lower resale and trade in value than those who receive Paintless Dent Repair from Dent Dominator in Raleigh, NC.

If your vehicle’s door, side, bumper, or other areas sustain dings or dents, let the professionals at Dent Dominator help with paintless dent repair services in Raleigh, NC. Whether caused by shopping carts, another driver parked too close, or anything else, we can help!

When your custom vehicle sustains damage, you may wonder how to get repairs without affecting its current look. Dent Dominator offers state of the art paintless dent repair services that restore custom, luxury, and high end cars in Raleigh, NC & the Triangle area of North Carolina.

Keeping your car dent free is only one part of the equation. You wouldn’t put dirty shoes on with a nice suit and you wouldn’t want to drive around with scuffed or damaged rims when the rest of your car looks sharp. We can repair or refurbish your curb damage, corroded rims and other unsightly blemishes and damage to your wheels. Want to change the color of your wheels or have your calipers painted? We can take care of that for you as well.

Anyone who lives in North Carolina knows that the sun can be hot on us, our pets, and our vehicles. That’s why we always equip our own personal cars with professional window tinting as soon as we take possession of them. Whether you are looking to reduce glare, cut down on the head & sun inside your car, protect the interior of your vehicle from damaging UV rays, or you just want the custom look of window dinting, here at Dent Dominator, we’ve got you covered. We now offer in-house window tinting using Suntek Films

Whether you have a new car, new-to-you, recent custom paint job done or just want to protect one of your largest purchases, Ceramic Coating is one of the best options out there to protect your car’s exterior. Your car or truck deals with a lot of environmental and road debris every single day – from dirt, intense southern sun, road pollution, pollen, rain and general wear and tear. Ceramic Coating is a technology that when executed right, is an amazing preventive measure to extend the longevity of your car’s beautiful exterior. It’s less about the product – although that IS important – and more about the prep work before applying the ceramic coating. The best product in the world will look horrible and be ineffective if the proper detailed prep work is not done first. 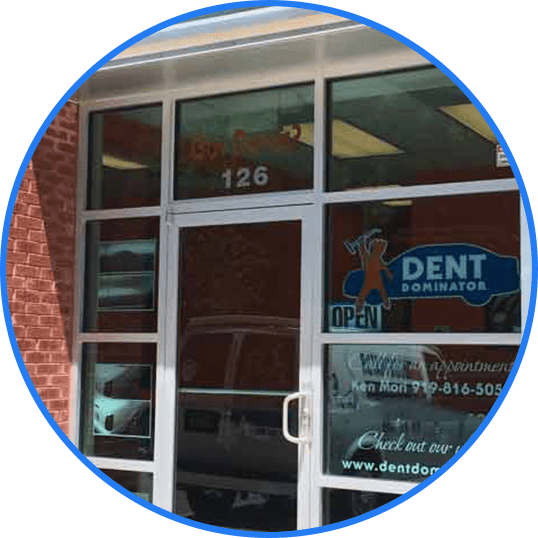 Ken Mori, owner of Dent Dominator, has been involved in Paintless Dent Repair services since 1993. In addition to running a successful business he has trains and mentors other technicians in the art, science and technique of PDR. Together, he and his wife Jamie, run their retail location in Raleigh near the NC State Fairgrounds.

What Our
CUSTOMERS
Are Saying

Dent Dominator
5.0
Based on 343 reviews
See all reviewsWrite a review
Great service! I had a ding in a brand new Model Y Tesla (thanks Elon 😉). Took it here rather than to the dealership. 99.9% perfect. Very satisfied.

Bruce Cabral
18:02 02 Feb 23
I typically don't write reviews but I've felt compelled for a while to write one for Dent Dominator. Ken and his wife run a top notch business that you don't come across very much these days. Ken is unbelievably talented at what he does, he also takes great pride in his work. They are also extremely friendly which made doing business with them so much more pleasant. If you are in need of paintless dent repair, look no further you will not regret it! Dent Dominator is undoubtedly worthy of all their 5 star reviews.

Mil-Spec Mutts
17:49 27 Jan 23
Can’t say enough. Clean shop and clean lobby (with some goodies to nosh and small fridge with drinks). It’s the small touches that add up. Ken and Jamie are super friendly and very responsive to e-mail and texts, even sending pictures of the progress. And of course, Ken is excellent at the kind of dent repair he specializes in. I’ve had to use his service twice in five years (stuff happens), and have been very satisfied each time. This is a quality shop, quality people, and a quality experience—very highly recommended!

Chris Sherman
00:09 27 Jan 23
Ken was really great to work with. I had a 1 inch dent in my front panel from an errant car door I had to get fixed, and he sent me a written quote over email the same day I inquired about an estimation and was able to schedule an appointment the next week - cost was comparable to two other quotes I got from other companies. The waiting area is pleasant and comfortable, with drinks and snacks - not a bad way to wait for an hour and a half. Would definitely go back here if my vehicle receives any other dents.

Matthew Watterson
14:23 20 Jan 23
I called Ken and Jami and told them my issue with my wife's 2019 Honda Pilot having about a 5” dent in the crease line of the right fender. I texted him 2 pictures and a video of it and he was able to get me in the same day and repair it! He done an amazing job! You couldn’t tell that there was ever a dent there. I waited while the repair was done. This is a great business and they are super great people as well! I will definitely use them in the future and refer anyone needing this type of service to them5 Star ⭐️ ⭐️⭐️⭐️⭐️ Business & Service

paul bell
03:12 04 Jan 23
This is the second job that Ken has done for me in the past few years. It's amazing what he can do with dents that you think would require OEM replacement. Compared to the estimate I got from a Tesla-referred higher end body shop, Ken cut my cost for dent repair by 80%. Although the area will need some surface refinishing, the dented area looks very good already. I fully recommend Ken, the Dent Dominator.

Tim O'Riley
19:14 03 Jan 23
Had a 1-2 inch dent on my car after a trash can fell on it right before the holidays. Ken was super responsive and was able to immediately get my car into his shop the same day i called him. He had it for about 1.5 hours and the dent was completely gone...like it never happened! And the price he gave was totally fair. Would highly recommend using Ken!

Rohan Surati
15:31 27 Dec 22
I highly recommended heading to Dent Dominator for any dent repair. Affordable prices and the quality of work is outstanding! Normally, most repair shop takes weeks to repair “small dent”. Time management is definitely a factor.loved the work done on my Traverse.Thank you,Ken!

Joeann Tapia
17:58 26 Dec 22
Got a door ding on my passenger side door right on a body line. Ken was nice and very informative on what needed to be done to fix the dent. He was also able to fit me in right before the holidays and the dent repair was perfect. Can’t tell there was a dent ever there. Thanks again, and Happy Holidays!

For professional paintless dent repair services in Raleigh NC and surrounding areas of the Triangle, contact Dent Dominator. We provide PDR services for hail damage, minor collisions, and door dings in Raleigh, Durham, Cary, Apex, Wake Forest, Morrisville, Holly Springs, Chapel Hill and beyond. Contact us online or by phone at (919)-714-9196 to schedule an estimate or for questions about PDR.